On the 138th Milad Mubarak of al-Dai al-Ajal Syedna Taher Saifuddin RA, we were blessed once again with the bayān mubārak of 3 Duat Mutlaqeen AS. In the recording of a waʿaz mubārak delivered in Udaipur on this very occasion in 1418 H, al-Dai al-Ajal Syedna Mohammed Burhanuddin RA stated that the Duat Mutlaqeen AS are the rivers of janna. Alluding to the incessant flow of these divine rivers, he mentioned that the succession of Duat Mutlaqeen AS took place through naṣṣ, one after the other. The 51st Dai, Syedna Taher Saifuddin RA, who in a glorious reign spanning 53 years delivered 4998 bayans and conducted 21,800 sabaqs many of which were up to two hours long.

Syedna RA vividly recalled how at the age of 4 he entered the august presence of the 48th al-Dai al-Mutlaq, Syedna Abdulhusain Husamuddin RA where his father, after offering his respects, took his place on Syedna’s right. Syedna Taher Saifuddin RA recollected how he had done salām to Syedna Husamuddin RA who picked up a small sword from a side table and gave it to him. Twice Syedna RA mentioned that the sword remains in his possession. He then added that Syedna Husamuddin RA would repeatedly state, ‘1335 is the year of Imam al-Zaman’s ẓuhur’. 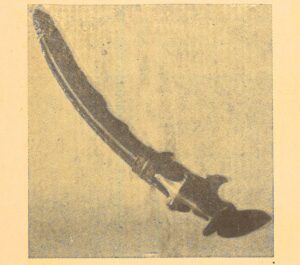 The sword given to Syedna Taher Saifuddin RA

Syedna al-Muqaddas RA described his numerous travels to the towns and cities of Mumineen. He mentioned how Mumineen would wait for his arrival, even if it was at 3 am in the morning and welcome him with cries of ‘Maula! Maula!’ He spoke of how he was warmly received in Egypt by the government and the people, and was gifted Fatimi dinars and textiles, being seen as the heir to the Fatimiyeen AS.

Syedna al-Muqaddas RA then went on to narrate how he had recited all 800 of Syedna al-Muʾayyad al-Shirāzi’s RA majālis, adding that in fact he had recited a 1000 majālis, for having completed them once he recommenced their recitation, reading 200 majālis the second time around. He mentioned that in a day he would conduct 27 sessions of sabaq, sometimes 22 and even 30 sessions. The dissemination of knowledge was incessant, yet so was the onslaught of adversaries. Apart from those who harboured enmity towards Dawat, there were many others whose thoughts were swayed by notions of atheism. Recalling these daunting and formidable challenges, Syedna RA exclaimed, ‘ḥālāt, ḥālāt, ḥālāt!’

Syedna Taher Saifuddin RA then mentioned that he had composed numerous verses in praise of Aimmat Tahereen AS. His works were Adab Fatimi, Fatimi literature, which unlike the writing of other poets were based on haqīqat.

‘Each day I am fresh and vibrant…each breath of a Dai is a tasbiḥ and every breath of mine is in your remembrance. I toil through the night for your sake. The students of Aljamea-tus-Saifiyah should [especially] show immense gratitude. So much has been done for them. Aljamea has become a sight to behold! Its curriculum was revamped so that along with religious knowledge, secular subjects are also being taught. Our students need to remain aware of how the world around them is functioning; such knowledge is part of dīnī knowledge.

The waʿaz mubārak then returned to Syedna Burhanuddin RA who related a series of counsels given by Syedna Saifuddin RA in a waʿaz mubārak in Sidhpur.

Mamluk-e-Aale Mohammed, giver of directives for the Hereafter, am your affectionate father. Imam al-Zaman AS has decreed that the nurturing of every Mumin is incumbent upon me. Any matter, major or minor, Mumineen may come to you with – for them their matter is major. Be it an illness, a matter of faith or of business. Know that, if a Mumin comes to you with a need and you fulfil it, news of this reaches Mamluk-e-Aale Mohammed, and I pray on your behalf. Even if you merely inform me of another’s need, I will be grateful to you!

Syedna al-Muqaddas RA explained how the upbringing of our children is in fact rendering assistance to him. He spoke of how he disliked when children were cleared from his path. “Why do you move them away? They are my children!”

Maulana Taher Saifuddin RA, as retold by Syedna Burhanuddin RA, explained that mercy and affection should remain the dominant sentiment between husbands and wives. A woman has the ability to draw her husband towards her; if she is dutiful to him, he will be dutiful to her. A wife should not castigate her husband. The work of the home is her domain while the responsibility to tend to those things outside the house and earn is that of the man’s. Maulatona Fatima AS herself turned the grinding stone.

Syedna al-Dai al-Ajal RA explained that there were three types of people: :

1. The most intelligent of the three is the one who puts away 300 from every 1000 that he or she earns saving it for a future need.

2. The second individual, who is intelligent but to a lesser degree, is one who spends only as much as they earn.

3. Then there is the third, who spends more than what he earns.

Syedna al-Muqaddas RA continued his counsels. One should not steal, there is no barakat in misappropriation. He then went on to state that household expenditure should be a mutual agreement between the wife and the husband, in which the husband is in the role of amir and the wife a vizier. If the man has 500 to allocate for household expenses then it is up to the wife to spend accordingly. She shouldn’t say, ‘last month it was a thousand, how will I run the house with 500?’, thereby sparking an argument. ‘If it is 500 it is 500, plan accordingly. There are some expenses which cannot be reduced, while there are those where a rupee’s expense can be reduced to 4 anna but in a manner that no indication of austerity is seen’.

Out of the ten shares of livelihood that Allah has ordained, nine shares are in business [and only one in all other forms]. Even if one is employed by a major corporation or prestigious firm, it is — after all — still service. Business is independence; even if one sells needles and thread under a tin roof shop. If one must work then let it be for a Mumin where faith will be safeguarded. If you employ a Mumin then treat him as family.

In the final portion of the waʿaz mubārak, Syedna Mufaddal Saifuddin TUA elaborated how Syedna Taher Saifuddin RA received the barakāt of Imam Husain AS in seven ways:

1. Even before he was born he received the barakat of Imam Husain when his respected mother placed her abdomen against the sacred ḍarīḥ mubārak of Imam Husain AS.

2. Not a single majlis or bayan of his was without the zikr and shahādat of Imam Husain AS.

4. He received the barakat of Imam Husain AS and Amirul Mumineen’s AS ziyāra a number of times and composed salutary salaams which are recited at their ḍarīḥ mubārak .

5. He was honoured with the construction and dedication of  a ḍariḥ mubārak for Amirul Mumineen AS and Imam Husain AS.

6. He was blessed with the ziyāra of Rās al-Husain AS as well as the honour of constructing the ḍarīḥ mubārak there.

7. His final resting place, Raudat Tahera, received the barakat of having been the site where the ḍariḥ mubārak of both Amirul Mumineen AS and Imam Husain AS was constructed.

Syedna al-Dai al-Ajal TUS then prayed to Allah Taʿala to bless Mumineen with purity in each and every aspect of their lives; their lifestyles, homes, bodily organs, thoughts, sustenance as well as every conceivable facet of life. He prayed that their tongues would gain purity through tasbīḥ, their ears would become pure by listening to the zikr of Ahle Bait AS , their hearts would gain purity through the love of Ahle Bait AS and that the soil of their graves would become pure as a result of their love for Abū Turāb, Amirul Mumineen AS.

As is his custom, Syenda Saifuddin TUS then placed great emphasis on the importance of attending the majālis of Imam Husain AS during Ashara Mubaraka. He counselled Mumineen to make the necessary preparations so that nothing would hinder them from the majālis of Imam Husain AS when the time came. Making special reference to school going and college going students, Syedna TUS urged them to never forget that the acquisition of knowledge is obligatory upon each and every Mumin and that the knowledge of Imam Husain’s AS zikr is the essence of all knowledge and as such is the most obligatory. He reminded Mumineen that throughout the year, they are engaged in worldly business which is undoubtedly necessary but when Ashara Mubaraka comes, they should not neglect the business of the hereafter. Lauding the enthusiasm to attend Imam Husain’s AS majālis which he beheld in young children, Syedna al-Dai al-Ajal TUS stated that it would not be surprising if the children, out of their zeal and determination, would lead their parents to the majlis of Imam Husain AS.

Narrating the heart wrenching shahāda of Maulana Ali Asgar AS, Syedna Mufaddal Saifuddin TUS stated that after the arrow which slew Maulana Ali Asgar AS pierced his throat, it then went on to lodge itself in Imam Husain’s AS blessed arm. Imam Husain AS cupped the gushing blood in his hands and intended to throw it up into the skies when a voice was heard saying that if the blood were to reach the heavens, rain would never again fall and the skies would be left in a state of perpetual anguish. Another call likewise was heard saying that if the blood were to fall on the earth’s surface, nothing would ever be able to grow from it ever again. Imam Husain AS then cast the blood towards the skies in such a manner that the skies accepted it: “asmān ye jhīlī lidu”.

Syedna Saifuddin TUS then narrated the shahāda of Imam Husain AS reminding Mumineen that when their last breaths would draw near, it is Imam Husain’s AS duʿāʾ which will sustain them and ensure that they are delivered into the khidmat of Imam al-Zaman AS, an honour and a privilege that is beyond all conception.

May Allah Taʿala grant Syedna Aali Qadr Mufaddal Saifuddin a long life in everlasting health and happiness until the Day of Qiyāmat.